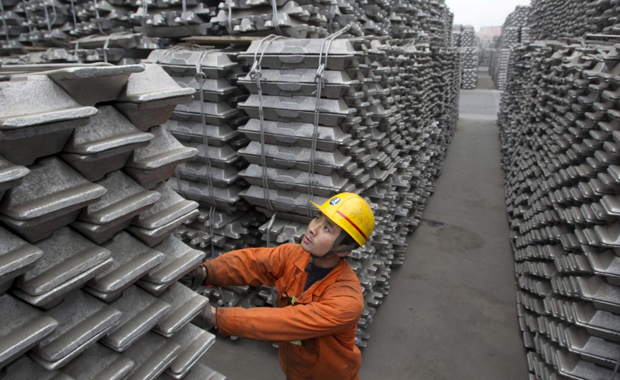 The country’s aluminum product output in the first two months of the year rose almost 21 percent from the same period last year to 6.9 million metric tons, according to data released Thursday 12 March, by the National Bureau of Statistics. China’s exports of aluminum products over the same period jumped 80 percent to 860,000 tons, customs data show.

“China’s aluminum smelters started some new production capacities in the second half of last year,” Wang Rong, an aluminum analyst at Guotai & Junan Futures in Shanghai. “We will see production of metals and products keep rising this year as more new smelters are scheduled to start commercial operation.”

China, producer of about half the world’s primary aluminum, continues to add capacity while smelters elsewhere struggle to cut enough supply to buoy prices. Shipments are flowing out of the country as some companies find ways around taxes on primary aluminum by minimally processing the metal to count as semi-fabricated products to avoid a 15 percent export tax, analysts at Sanford C. Bernstein & Co. said in a March 6 report.
Aluminum for delivery in three months on the London Metal Exchange rose 1 percent to $1,753 a ton at 6:18 p.m. in Shanghai. Prices are down 4.8 percent this year.

Global production will exceed demand by 460,000 tons this year, the most in three years, after supply shortages in 2014, according to Goldman Sachs Group Inc. The glut signals further declines and prices may slump 6.4 percent in the next several weeks, Bank of America Corp. wrote in a March 4 report.

Profitable Exports
China’s smelters are able to sustain production because of government support for lower power tariffs, according to David Wilson, the director of metals research and strategy at Citigroup Inc. Energy accounts for 40 percent of aluminum’s production costs, Macquarie Group Ltd. estimates.

“The Chinese government is urging links between power companies and smelters,” Wilson said after the data was released. “Smelters are also currently able to maintain high production because they can profitably export it in the form of aluminum products.”

Production of alumina, copper and zinc also rose to records for the first two months of the year, according to NBS data. Refined copper output jumped almost 16 percent to 1.2 million tons. The country produced a record 7.96 million tons last year.

“In terms of copper, a lot of new smelting capacity was added last year, which is in ramp-up phase now,” Citigroup’s Wilson said.
Chinese copper refiners may boost capacity by 8 percent, or 800,000 metric tons, this year, according to Bloomberg Intelligence.