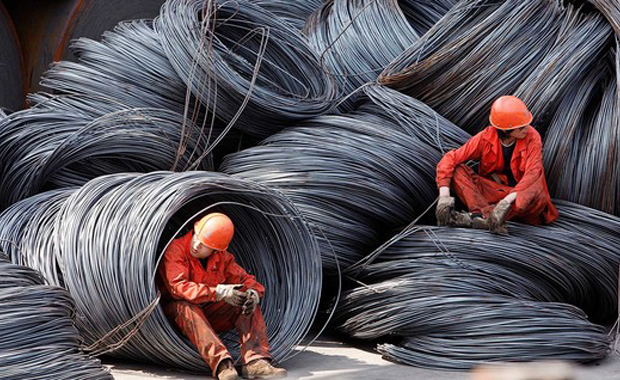 Xinhua – China will accelerate the overhaul of its overly-invested iron and steel sector to bring it back to a "basically balanced level" by 2017, the industry ministry said.

The Ministry of Industry and Information Technology (MIIT) said it would aim to bring industrial average profit rate and return on assets to a reasonable level, with more than 80 percent production capacity utilized, according to its industry policy draft published Friday.

This is the latest move from the government to tackle overcapacity, which has plagued China since the 2008 financial crisis.

The draft proposed to speed up the merger and acquisition process to create three to five major steel producers by 2025 and will ensure the 10 largest companies account for no less than 60 percent of total output.

The draft outlined that factories' pollutant emission and energy use should be in line with national standards, with the aim that all solid waste will be recycled by 2025.

The government has been at pains to digest production gluts in "favored" sectors, including steel, caused by rapid expansion with little regard for real market demand. The once-overheated sector is now undergoing a bitter winter, with many small steel makers filing for bankruptcy and some large producers struggling.

As demand continued to shrink and signs of overcapacity became more apparent, the government in 2013 vowed that it would slash production by 80 million tonnes by 2017, roughly equal to the annual output of the United States, the world's third largest producer. In 2014, 31.1 million tonnes of steel smelting capacity was eliminated.

However, the tough times are likely to continue this year. The ministry admitted that although the country had banned new factories, crude steel output may continue to rise with previous construction projects still in operation.

In addition, sluggish steel demand is showing no signs of improvement.

A Moody's report pointed out that domestic demand will be limited this year dragged down by the slowing economy and weakness in real estate market.

The China Iron and Steel Association (CISA) also cautioned that the economic slowdown and structural adjustments were dampening the appetite for steel, adding more pressure to a sector already suffering from overcapacity.

The CISA asked steelmakers to actively adapt to the changes and transform their business model to foster new profit growth.