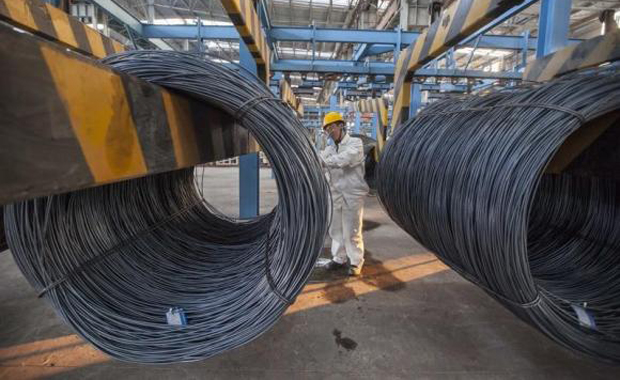 Reuters – Laden with debt and struggling to make money as the world's No.2 economy loses momentum, China's steel mills do not appear obvious candidates for overseas expansion.

But the country's crisis-hit steel sector is calling for strong government backing for plans to ramp up foreign acquisitions, as it looks to escape weak demand-growth and soaring environmental costs at home.

In a draft of a revised restructuring plan for the industry issued late last week, Beijing included a line saying it would support mills' efforts to buy assets abroad, with attention now turning to more detailed measures that could be announced later in the year.

"There is capacity that we can shift abroad, to regions that need it like Southeast Asia and Eastern Europe, as well as places like Indonesia and Africa where demand for steel is huge but production capacity is very low," said Deng Qilin, Chairman of Wuhan Iron and Steel Group, China's No.4 producer.

Foreign expansion by the world's biggest steel sector would offer some support to prices of steelmaking ingredient iron ore, which plunged to record lows this month as Beijing ramps up environmental checks that could shut more mills in an industry where production capacity is 300 million tonnes above demand.

The export market offered one of the few bright spots for Chinese producers last year, but trade barriers erected amid accusations that China has been dumping products overseas mean exporting is becoming more difficult, with firms increasingly looking to shift actual output abroad.

Beijing has already rolled out measures to broadly encourage the foreign expansion of Chinese industry including simplifying currency rules and making it easier to raise money through bond markets, with sectors such as nuclear at the forefront of the drive overseas.

At this year's full session of parliament, Wuhan Iron and Steel along with another major producer, Anshan Iron and Steel Group, urged the government to provide financial and policy support for the steel sector's expansion abroad.

China's top steelmaking province of Hebei has also called for greater backing for its plan to move 20 million tonnes of capacity overseas by 2023.

Some are already making the leap, with Hebei Steel Group, China's largest steelmaker, looking to build a 5-million-tonne-per-year steel project under a joint venture in Africa.

Shougang, one of the largest mills, in February started production at a Malaysian project with an annual capacity of 3 million tonnes.

A smaller company, Bazhou New Asia Metal Products Co. Ltd, bought a stake in an Indonesian firm in 2013 to build a steel strip project, with vice-president Xing Xiuying saying it made the move as there was little room to expand in China.

"Investing abroad will help China to cut the excess capacity at home in the long run, as some companies will shift their focus to overseas markets and thus reduce output and competition domestically."

Others have found moving more tricky, with the Baosteel Group and Wuhan Iron and Steel both dropping plans to build plants in Brazil, blaming high costs.

"It will depend on how much capital is eventually engaged in helping Chinese firms go abroad, but generally speaking, the overseas expansion strategy will have a positive impact on Chinese steelmakers in seeking new growth," said Lawrence Lu, analyst at Standard & Poor's Ratings Services in Hong Kong.

Some were more sceptical, questioning whether there would be cost advantages to shifting output.

"The government should not use this as a main solution to ease domestic overcapacity as any blind push would bring consequences," said Jiang Feitao, policy researcher at the China Academy of Social Sciences.