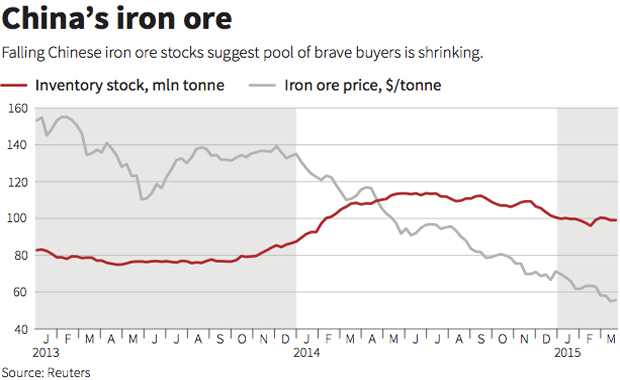 Reuters – Stocks of imported iron ore at ports in China, the world's biggest consumer, have stuck at or below the 100 million tonne mark since the start of the year. They look set to fall further as a protracted price slump drives away buyers.

Inventories of the steelmaking raw material at 44 major Chinese ports had slipped to 99.05 million tonnes as of March 20, down 1.1 million tonnes from the prior week and heading back towards a one-year low of 96.05 million hit on Feb. 13, according to industry consultancy SteelHome, which tracks the weekly data. That compares with a record high of nearly 114 million tonnes last July. Iron ore stockpiles at Chinese mills and domestic mines have similarly declined, Citigroup said.

In commodities, a decline in stocks would typically lift prices, suggesting that more material is being consumed instead of being left in warehouses. But in the iron ore market, the typical inverse relationship between stocks in China and global prices has shifted and the two are now moving in tandem, reflecting the dire state of a market that has lost half of its value in the past 12 months. This week, the iron ore price touched a record low of $54.20 a tonne .IO62-CNI=SI.

Stocks had built up in part because traders were buying ore and using it as collateral to borrow funds for speculating in China's property and financial markets. But that began to unravel when banks tightened credit after a metals trade financing scandal at the Qingdao port last year. Financing became even tougher as iron ore prices went into a prolonged slide, with demand growth from China's steelmakers slowing and profits from ore sales drying up. That falling price trend, which is expected to continue for the long haul, is also encouraging traders to minimise inventories of an ever-cheaper commodity.

"The challenge in a deleveraging market is that additional supply cannot be absorbed in the absence of demand growth," said Citigroup, which expects iron ore to fall below $50 per tonne. "Most spectacular has been the trader sector where many have left the business and those remaining are focused almost exclusively on back-to-back deals rather than holding speculative inventory."