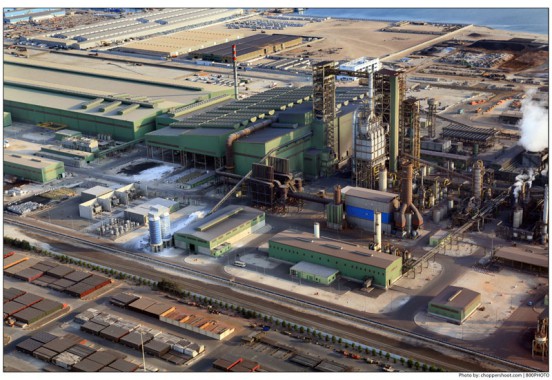 
KhaleejTimes – The Abu Dhabi industrial strategy will focus on 13 industries in 2015 to boost economic growth, a report said.

Top on the agenda would be high growth sectors of renewable energy, gas, semi-conductors, construction material and petrochemicals. Aviation, transport equipment, iron and steel, aluminium, plastics and food would also be looked into, according to the Department of Economic Development (DED).

The industries in focus would be provided with required incentives and maximum support. They would be given land and infrastructure at competitive prices, along with investment incentives by providing easy funding for the projects.

According to the Department, in 2013, the manufacturing sector’s output rose to Dh41.5 billion, growing nine per cent over 1.3 per cent growth in 2012.

Abu Dhabi’s manufacturing sector output grew strongly at 4.9 per cent in the five-year period of 2008-2012. The sector contributed 5.7 per cent to the gross domestic product (GDP) in the year.

Among top industries in Abu Dhabi are chemicals and plastics, which accounted for 50 per cent of the total manufacturing output in the year.

The Khalifa Industrial Zone and the Industrial City of Abu Dhabi are two centres of industrial activity. Industrial investments have been made here, which have not only boosted self-reliance in many sectors, but also resulted in economic diversification into non-oil economy, a key objective of Abu Dhabi Economic Vision 2030.

The oil and gas industry’s contribution dropped one point to 51 per cent in 2013 from 52 per cent in the previous year.

Construction sector has shown growth. It is generating a lot of business for construction material industries and companies involved in providing various services.