Egypt: Build a new capital at a cost of $45 billion 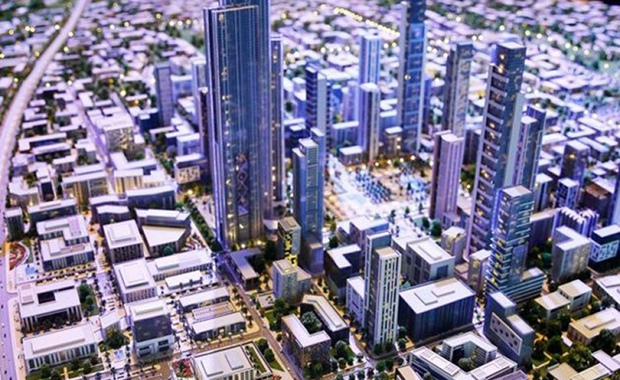 Al Ahram Weekly – Egypt's construction industry is gearing up for a marked increase in activity following announced plans to build a new capital at a cost of $45 billion, along with other major real estate projects worth over $12 billion. The projects were unveiled at last month's Egypt Economic Development Conference (EEDC).

Experts predict increases in the prices of land and property as a result of a hike in demand following the wave of fresh investment in the real estate sector announced during the conference.

"Real estate prices will continue to go up as there is strong demand," said Harshjit Oza, a property and banking analyst with Naeem Holdings. He added that there is a demand-supply gap across premium and affordable properties that is helping to keep prices on the rise.

However, he stated that price increases in the sector have been fairly linear over the last few years due to the absence of speculative demand.
Oza told the Weekly that the new projects announced during the conference will be able to meet the demand for quality real estate development, as Cairo currently "falls far behind in commercial and retail space per capita when compared to other big cities in the region."

Ahmed Al-Zeiny, head of the building materials division at the Cairo Chamber of Commerce, predicts a 20 per cent increase in the price of real estate this year. "Steel and cement prices increased last week by LE100 and LE50 per ton, respectively," he said, adding that the projects announced at the EEDC would naturally lead to a boom in the construction sector.
"Demand for building materials will increase steadily," he said. A ton of steel is currently selling at an average of LE5,000, and the price of a ton of cement is roughly LE750.

Al-Zeiny said the announced projects have led some cement and steel companies to reduce the quantities available for the local market, in order to benefit from the strong demand for building materials expected soon.

"This is one of the main reasons behind the current price hike for building materials," he said.

The main project announced during the EEDC was Egypt's new administrative capital, which, yet to be named, will be built to the east of Cairo on 700 square km of land, an area almost the size of Singapore.

Housing Minister Mostafa Madbouly announced at the conference that the new capital will house more than five million people and provide 1.5 million jobs.

Expected to be established within seven years, it will host 21 residential districts, more than 600 hospitals and clinics, 1,250 mosques and churches, 2,000 schools and colleges and a theme park four times the size of Disneyland.

Ministries, the parliament, government buildings and foreign embassies would move to the new administrative capital, which is also seen as a solution to the traffic congestion and overpopulation in Cairo.

The present capital currently houses about 18 million people, a number that is expected to double over the next 40 years.

The $45 billion project will be built by Capital City Partners, a UAE-based real estate investment fund that was behind the building of the world's tallest building, the Burj Khalifa in Dubai.

Other real estate projects announced during the EEDC included memoranda of understanding (MOU) signed with a consortium of Arab companies to build a tourist resort on 557 feddans of land in 6 October City at a cost of $4 billion.

The minister of housing also announced the signing of an MOU with the Palm Hills Company to develop a project in New Cairo on 500 feddans of land at a cost of $3 billion.

The final agreements on these projects will be signed within three months, Madbouly said.

Al-Zeiny said that the EEDC real estate projects will increase the attractiveness of properties for sale, especially in places near the proposed projects.

In order to prevent ongoing increases in the prices of building materials, Al-Zeiny said that the Ministry of Industry and Foreign Trade should cancel a previous decision to impose anti-dumping fees on steel imports.

"We need about one million tons of imported steel to achieve a balance of prices in the local market," he said, adding that the government should also make more dollars available for importers.

Daker Abdallah, a member of the Egyptian Federation of Construction Contractors, said that the federation includes 15,000 companies ready to take part in the mega-projects for developing Egypt.

However, most of these are small- and medium-sized enterprises and they will need credit facilities from the banks. "They will also need the government's support," he said.