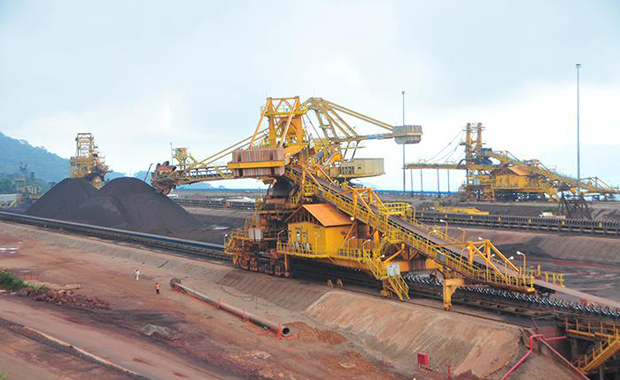 Reuters – Spot iron-ore prices tumbled below $50/t on Wednesday while Chinese iron-ore futures dropped a sixth straight session to a contract low on persistent worries that output cuts at steel mills would eat into demand for the raw material.

Sluggish steel consumption and soaring environmental costs have combined to force mills in the world's largest steel producer and consumer to curb production and keep iron-ore stocks at a minimum.

Spot iron-ore prices are at their lowest level since a key benchmark pricing index began in 2008, ending January-March with the deepest quarterly loss ever at more than 28%.

"So I expect iron-ore prices to hover at the current low level for a while.

" Benchmark 62% grade iron-ore for immediate delivery to China plunged 3.9% to $49 a tonne on Wednesday, the lowest level since compiler The Steel Index began publishing prices in October 2008.

Citigroup had predicted a fall in the iron-ore price to below $50, citing a drop in Chinese steel demand.

The spot benchmark, which saw a steep 47% fall last year, was down 19% in March.

iron-ore for September delivery on the Dalian Commodity Exchange tumbled 3.2% to close at 391 yuan a tonne, just off a session low of 390 yuan, its weakest since the futures were launched in October 2013.

"Mills and traders remain sidelined as threats of environmental inspections and speculation that as much as 40% of steel mill capacity is pegged for closure keeps the outlook negative," ANZ Bank said in a note.

Surveys of China's manufacturing and services sectors also showed persistent weakness in the world's second-biggest economy in March, adding to bets that Beijing will have to roll out more policy support to avert a sharper slowdown.

The most-traded October rebar contract on the Shanghai Futures Exchange hit a session low of 2,381 yuan a tonne, its weakest since the launch of the contract in 2009.