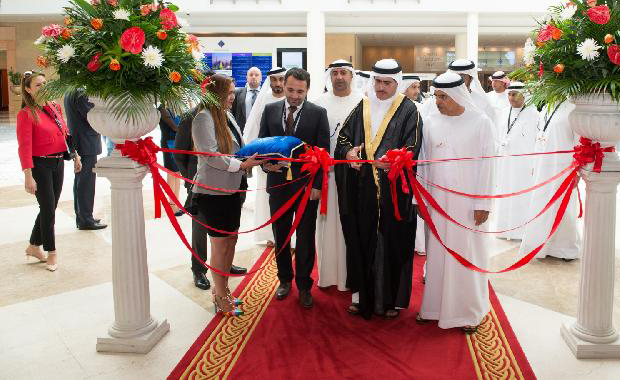 The event, being held under the theme “Forging Connections, Building Possibilities” is running at the Dubai International Convention and Exhibition Centre. The aluminium industry’s iconic trade show is taking place on a gross exhibition space of about 3,000 sq m. Germany, Italy and China have put up country pavilions at the exhibition which is expected to attract over 4,000 industry professionals from 75 countries.

Exhibitors briefed them about their companies’ operations and market profiles in addition to their interest in the Middle East region in general and the GCC and UAE in particular. The exhibition is taking place against the backdrop of the aluminium industry witnessing a new level of extraordinary growth and the Middle East consolidating its position as a powerhouse of the world’s aluminium industry.

Al Tayer said the UAE’s total aluminium production has reached 2.4 million tonnes last year, which is the maximum that could be achieved with the existing facilities. Of this, about 300000 tonnes are presently utilized in the country, the Arab world’s second biggest economy, and the rest being exported to over 35 countries around the world.

The UAE is the presently the world’s fourth largest aluminium producer, accounting for over 50 per cent of the Arabian Gulf’s aluminium production. Aluminium exports from the country grew by 102 per cent in the first half of 2012 and the sector is expected to become one of the key non-oil industry sectors in the future.

Abdullah bin Kalban, CEO and managing director of EGA, the world’s fourth biggest aluminium producer, said $15 billion have been invested between 2005 and 2014 in improving the production at EGA and $5 billion is planned to invested further into capacity enhancement in the coming years to meet the growing demand for aluminium.

The GCC’s aluminium production is believed to have reached the five million tonnes mark in 2014 in order to cater for the increasing global demand. Demand globally is estimated to increase and reach 70 million metric tonnes per year by 2020 and GCC countries are expected to boost aluminium production capacity by up to 40 per cent.

According to statistics, the Gulf aluminium industry is growing by 8.4 per cent annually, compared to an average annual global expansion of 3.5 per cent, making the Middle East the fastest growing aluminium market in the world.