Owned company «Arab Media» registered in Iraq in 2011, the website «Arab metal» became a part of the diverse media activities.

Editorial Board, headed by Mr. «Talib AdDaoud» as general manager and editor in chief. 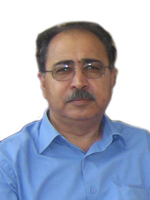 Mr. AdDaoud held, at the end of the Eighties and early Nineties, multiple positions in the field of executive management in many Publisher companies in Syria – Damascus. He worked, also, as senior of e-information department with «Arab Iron and Steel Union (AISU) – Damascus Regional Office» during the years 1994 – 2010. He worked, also, as Executive Secretary of Editing of the Baghdadi newspaper «Assabah Al Jadid» until the beginning of the year 2014.

«Arab metal» Editorial Board is working to transform the website to be the gate of Arab Metals Industries, which is witnessing great development, as a result of large investments allocated to it during the last three decades of the twentieth century, and years of the twenty-first century.